Follow updates received direct from Dan & Matt and track their progress along route.

You can support the trip by donating directly to the SupplyRun Just Giving Page.

A day later than planned, we’ve made it safely home. A round trip of 2498 miles in the van plus around 20 on the back of a recovery truck!

It’s been an eye-opening trip and has felt great to be able to contribute, I just wish it didn’t feel like such a small drop in the ocean. 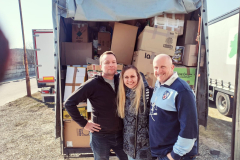 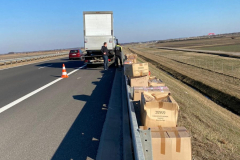 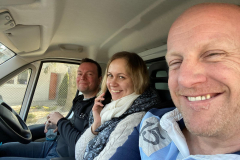 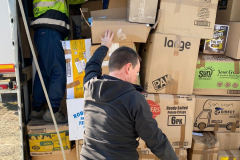 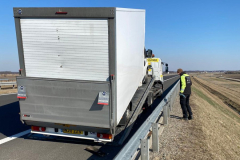 Well, that was quite a journey. Breaking down 30 miles from the Ukraine border wasn’t in the script! But we are up and running again with some help from our new found Polish friends.

The aid was transferred into Ukranian trucks at Przemyśl to head across into the Ukraine shortly and be distributed to those in need by the Red Cross.

A thought provoking trip, more reflections to follow when I have time to process it all.

Many thanks to Agnieszka Łokaj and all at the Lewisham Polish Centre for all the work you are doing – I’ve seen it in action and it is impressive. Plus a huge thank you to Aleksandra Osetek for all that you are doing in Przemyśl – even if I still can’t pronounce it! The way that the whole of Poland is reacting to this is incredibly impressive and you are a significant part of that.

Now physically heading rapidly west and home, but our thoughts are still in east Poland and the Ukraine.

A bit of an eventful day today. 10 miles after our last stop, we had to pull over with a mechanical issue. We had to be recovered back 25 miles in the wrong direction.  We were keen to get some of the aid across to the border to start distribution, and given how close we were, we managed to do a shuttle run with a friend of the recovery driver to get about 20% of our delivery there.

Tonight we are holed up in a hotel in Lancut, waiting for the van to be fixed. We’ve arranged to see the van late morning tomorrow, but as yet we don’t know if we’ll be confronted with a repaired van or an estimate to fix it, and we are very conscious that the weekend is now on us!

Very interesting talking to the volunteers here about the 2000-5000 refugees that are arriving into the train station every night, in the early hours of the morning.

Poland is doing a great job for these people, but it is certainly a huge task.  You need a large number of volunteers at the station every night to assist that many arrivals; most not speaking Polish and many in a pretty distressed state. That is just the first small step in the support that they will need, and it is happening in many places all over Poland and beyond.  Tough times.

We’ve just had our last stop before the border which is now less than 50 miles away. All of the road signs are to L’viv now (around 40 miles further), which brings it home after last night’s attack on its airport.

Life down here appears pretty normal on the surface. About 1 in 10 vehicles on the motorway appears related to the conflict in some way – usually vans like us with some Ukrainian or charity flags or logos, plus the occasional military vehicle.

I expect Przemyśl to be pretty busy with vans of aid, but we’ll see soon enough!

Only 155 miles to Przemyśl, so we should be there to meet our charity contact Ola late morning.

All of the supplies are going to then be given to the Red Cross to be taken on into the Ukraine. We then have another 478 miles to go to our scheduled stop tonight in Dresden.

Those mileages sound a lot, but if you are used to travelling in a car they don’t really do it justice. The roads are full of lorries limited to 90km/h (56mph), whilst we can go a bit faster, not much and up any hill our speed drops to 45-50mph.

To put that in perspective – for those in the UK; we have a bunch of roadworks on the M1/M4 (etc) where you are restricted to 50mph for miles on end. People find that very frustrating.

We are averaging around 50mph, so imagine doing 1250 miles to eastern Poland like in those roadworks and you get a sense of how it feels!

All that said, it’s a really interesting trip and a very worthwhile cause, I’m just saying a future as a long distance lorry driver is probably not for my calling!

We’ve passed the time with the classic game “beef or mints”. One person shouts “I’m mince” or “I’m mints”.

The other player then shouts “beef” or “polo”. If you get it right you get a point. 😎

It’s been a long day…

DAY 2 : DORTMUND IN THE RAIN

Morning off to a rainy start in Dortmund… 683 miles today.

After 437 miles, 1 ferry crossing, 5 countries, 2 whoppers with cheese and 4 disagreements over music, day 1 is complete.

Note to self: van goes a lot slower with 1.5 tonnes of nappies and baby food inside!  7.5 hours until we’re on the road again. Goodnight!

The aid is a mix of medicines, nappies, baby food, etc

Three countries so far (UK, F, B) and 2 to go tonight (NL & D) before we reach our hotel in Dortmund 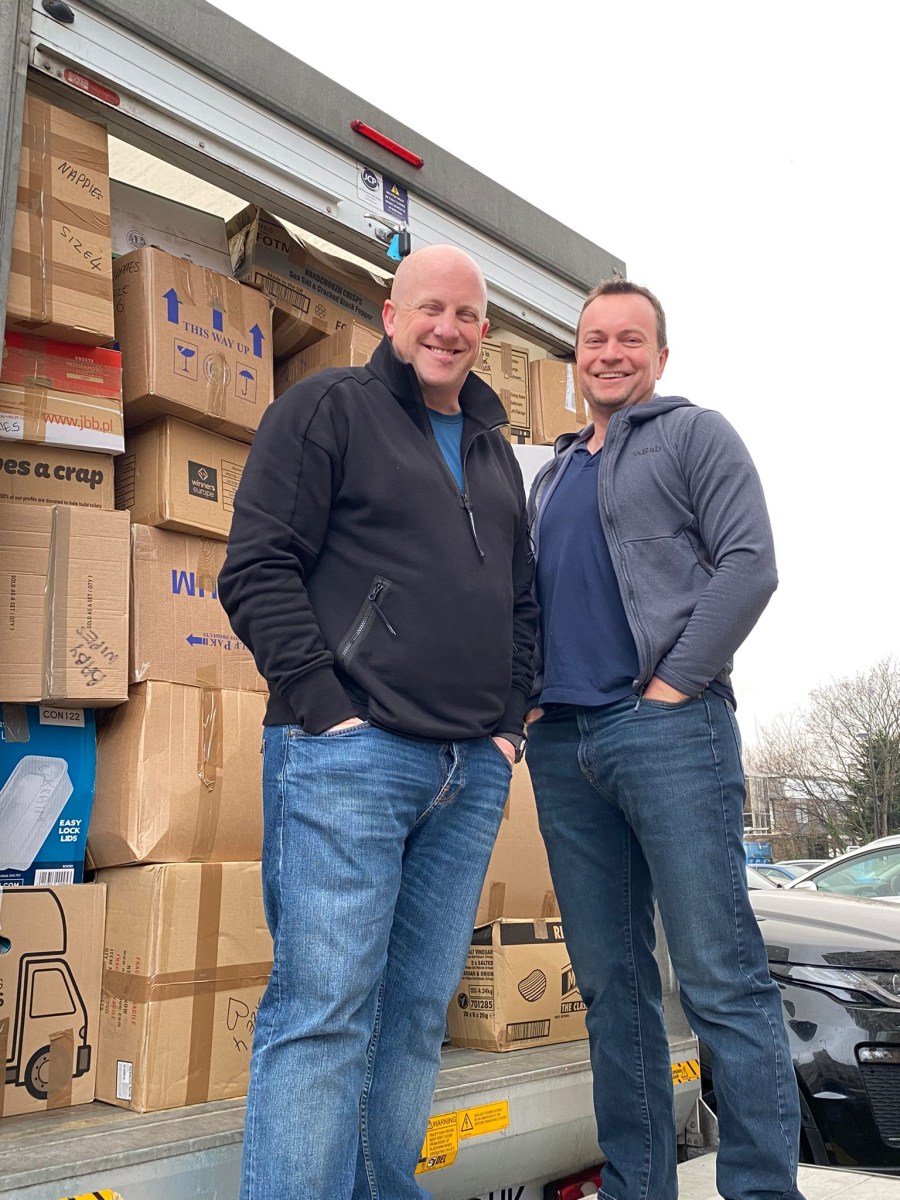 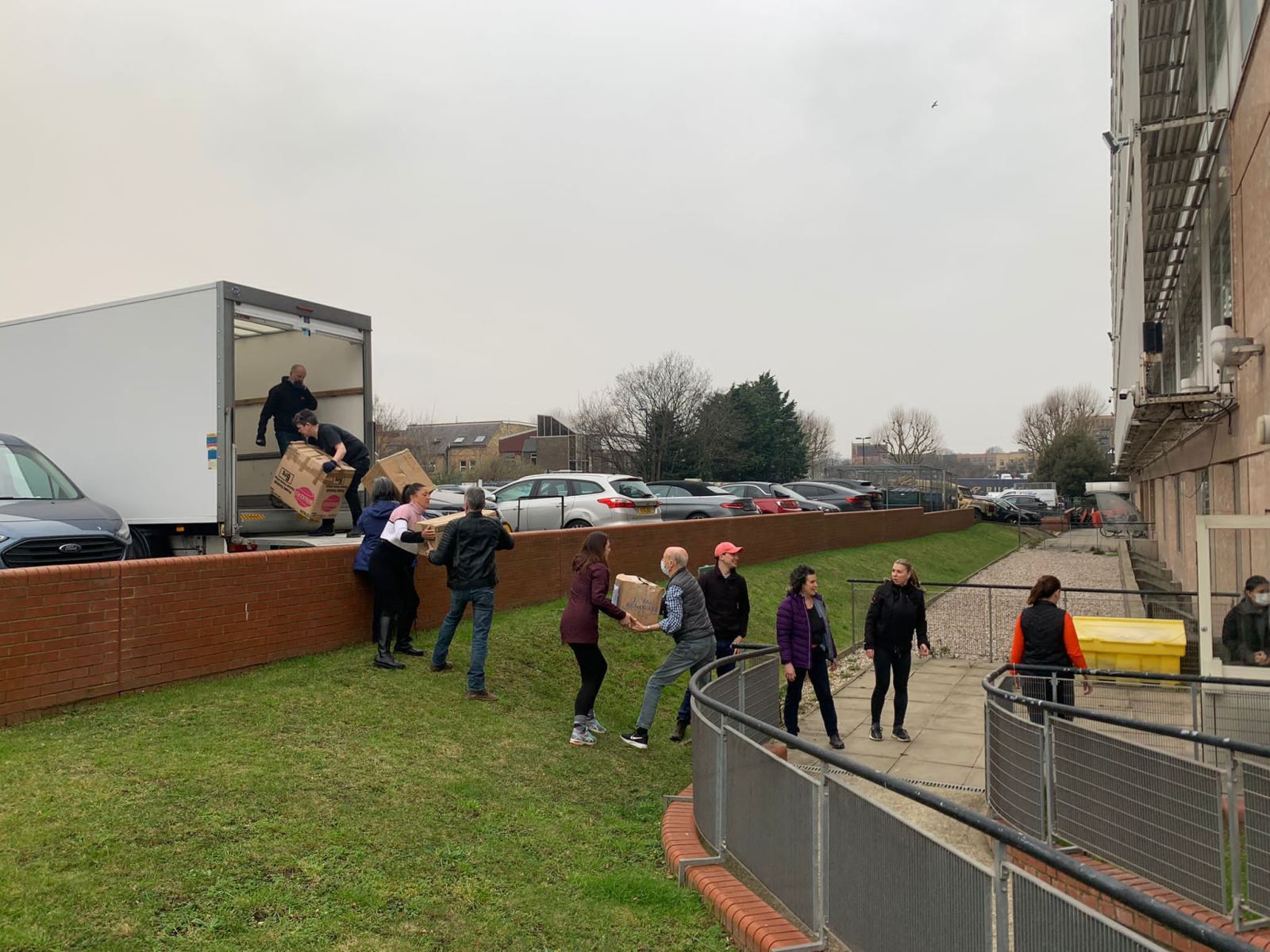 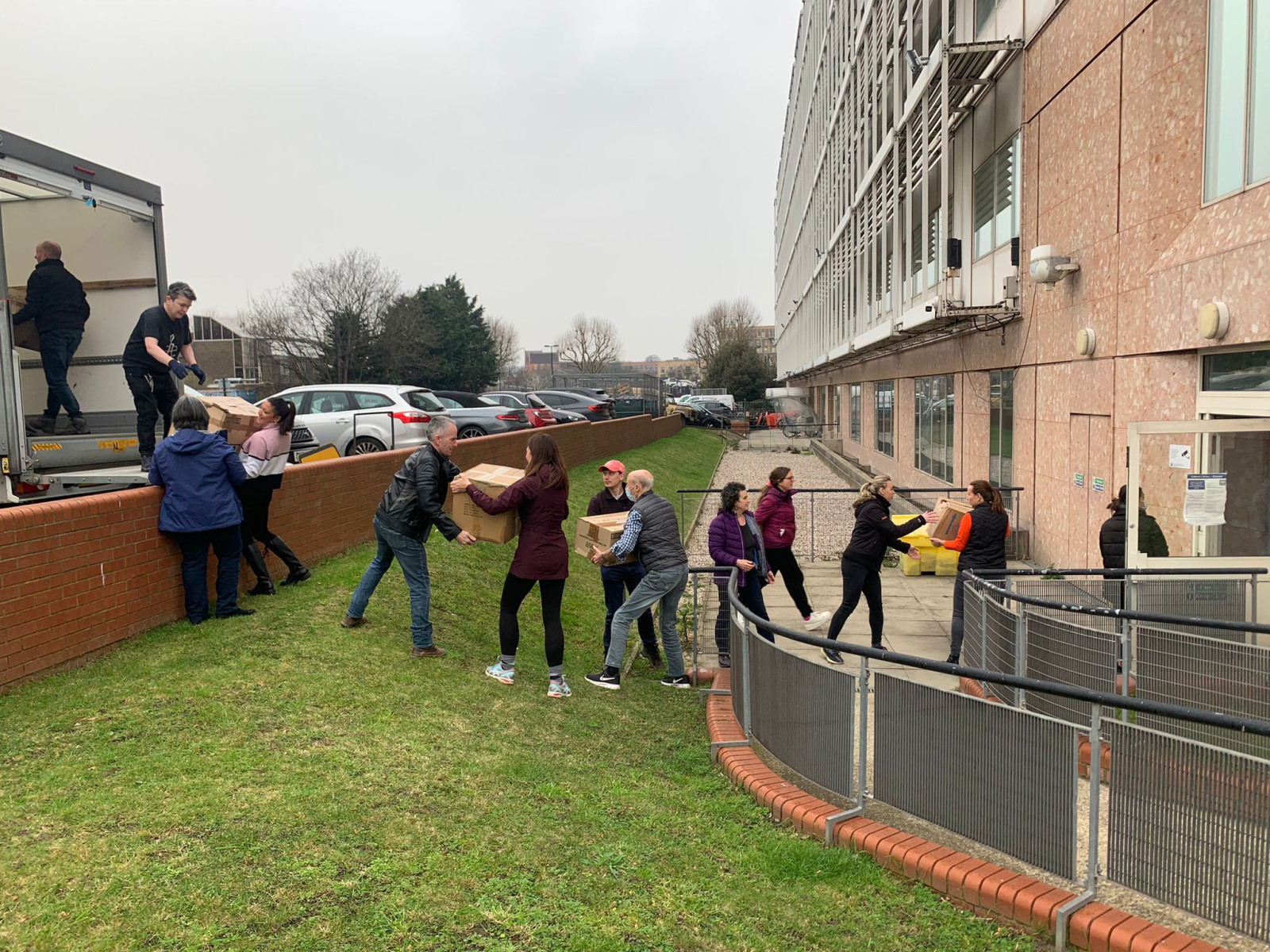 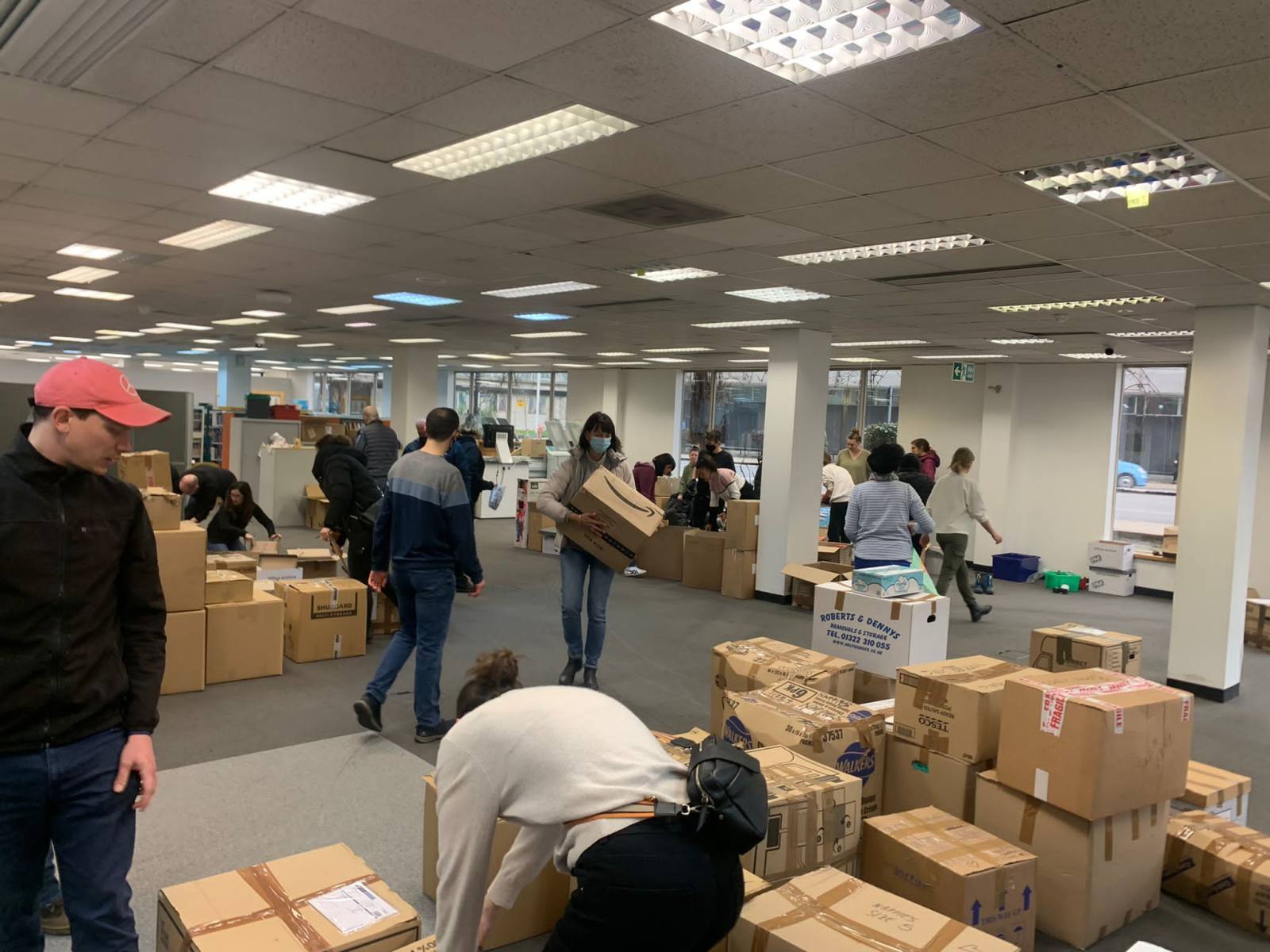 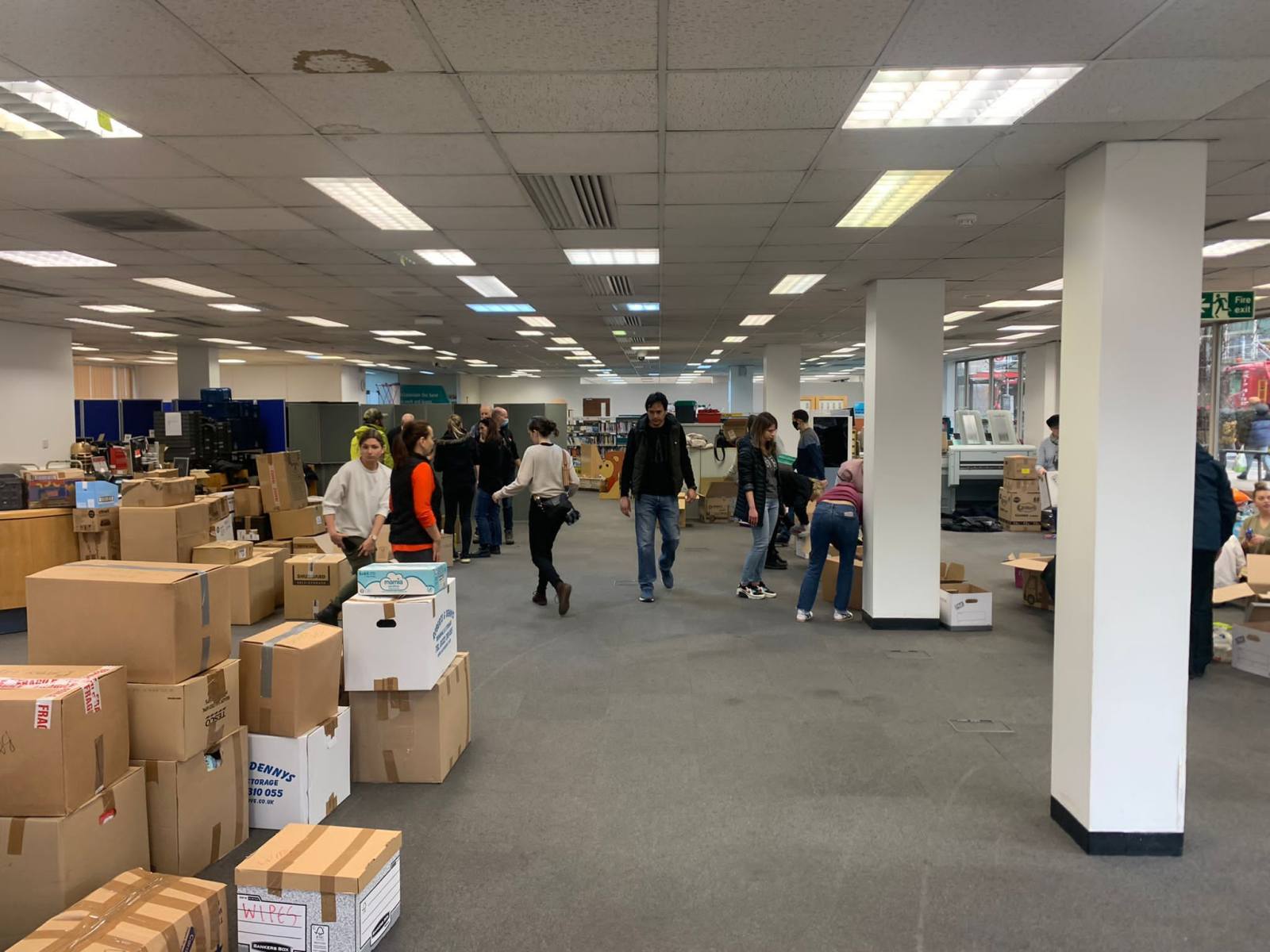 We’ve just loaded up at the Lewisham Polish Centre with 1.5 tonnes of aid and are heading out of London, hoping to get an early afternoon ferry from Dover.

The aid is a mix of medicines, nappies, baby food, etc

On Wednesday, I will set off with a mate for the Polish/Ukraine border in a 3.5 tonne Luton van filled with supplies from Lewisham Polish Centre (LPC) in London.

Over the last couple of weeks, the LPC have done an incredible job of coordinating and collecting donations from the public and companies alike.

Although the emphasis and advice is now changing from in-kind donations to monetary donations (to DEC and the large charities), LPC need urgent help to get the aid already collected to those who need it most.

We will not know until the day exactly what we will be taking, but likely to be a mix of medical supplies, tents, blankets, warm clothing, nappies, etc.